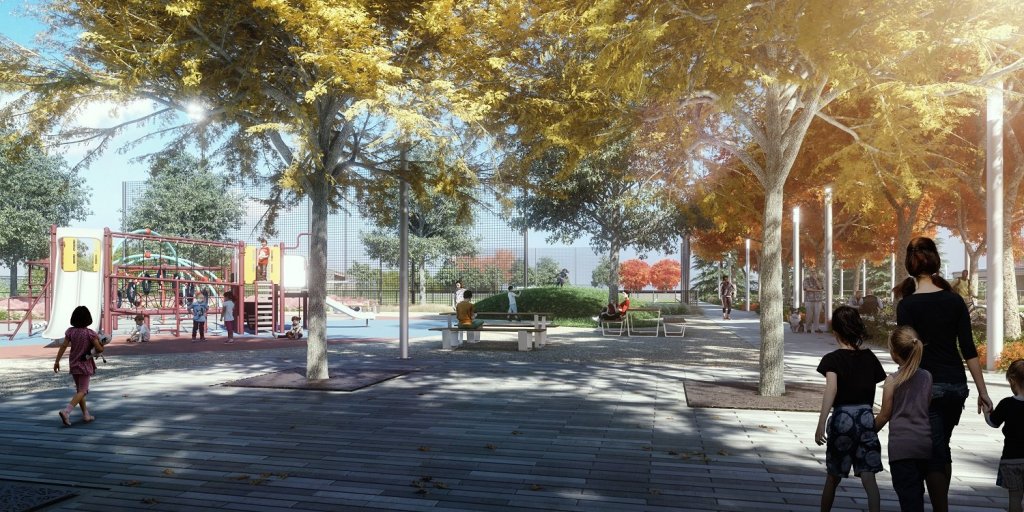 While baseball continues to cling to its title as America’s national pastime, it’s no secret the rest of the world lives and breathes soccer. And that’s no different in Santa Clara, where the sport is growing in popularity, especially among youth. So it’s only fitting that the city broke ground Thursday afternoon on a new community sports park complex that will have not one or two, but five soccer fields.

The 8.7-acre Reed and Grant Sports Park at the corner of Reed and Grant streets in a light industrial part of town will feature five well-lit soccer fields of various sizes, a playground, promenade and picnic area. The sprawling park will include a 3,800-square-foot multipurpose building that serves as a main entry to the park and space for activities such as wrestling, karate and exercise classes with food concessions, to boot.

“I can tell you it’s going to be a very well-used facility,” said Santa Clara Mayor Lisa Gillmor. “This fills a tremendous need and void in our city and I’m so excited to see the future children play on these fields and enjoy it year-round.”

The park is the city’s answer to a needs assessment study it conducted in 2014 that revealed residents want more recreation space in the city, especially those that play soccer. More Santa Clara youth are enrolled in soccer than any other sport, according to Santa Clara’s parks and recreation department director Jim Teixeira. He estimates that upwards of 3,000 children are enrolled in a soccer league or group of some type. Despite that, not counting school athletic fields, the city has just one public soccer park — the Santa Clara Youth Soccer Park near Levi’s Stadium.

“Soccer’s really big and there’s a high demand,” said Teixeira. “We use a lot of school fields for soccer in the city so this particular sports park is the beginning of a larger facility over time.”

Soon after the study, Santa Clara adopted an ordinance with the aim of adding 2.5 to 3 acres of public park land for every 1,000 residents and since then, the city has made strides in expanding its green space, said Gillmor, citing the opening of a new community garden last week as a recent example.

As part of the sports park project, the Raymond G. Gamma Dog Park next door is also getting a face-lift. Once completed, it will feature its own paved parking lot and one bathroom stall where previously there was only a portable toilet.

LPA, a design firm based in California and Texas, handled the design of the new sports park. The firm’s associate principal, Arash Izadi, said the park was designed with safety, sustainability and access in mind. The soccer fields are designed for different age groups on a wedge-shaped site that includes both synthetic and natural turf fields. In addition, the doors of the community room are designed to roll up to expand the space and merge it with the outdoors.

Start your day with the news you need from the Bay Area and beyond.
Sign up for our Morning Report weekday newsletter.

The sustainability feature comes into play with the multipurpose building roof, designed to direct stormwater to retention areas, and techniques to reduce water runoff throughout the site. The entire facility will use LED sports lighting powered by a solar paneled roof.

The park will have a total of 48 bike stalls and 202 on-site parking spaces, including seven electric vehicle charging stations.

Construction on the park is expected to wrap up by September 2019.

Home sale prices from San Jose and Peninsula areas, May 18

Marni Jameson: How to know when it’s time to move

Sponsored: One of a Kind: A luxurious European-inspired chateau in Lafayette’s Happy Valley